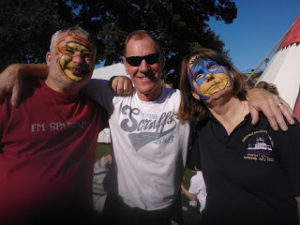 The latest trip to the Farne islands resulted in two days blown out.

We had to find something to do. On the second day, as luck would have it there was a Beer and Food Festival in Berwick. A few foaming ales and someone suggested it would be a good idea (??) to have our faces painted.

Two of us agreed to do it for charity. We raised £120 for the RNLI and on the way back to Seahouses we raised a few eyebrows from oncoming drivers as Eyore was also one of the Designated Drivers!